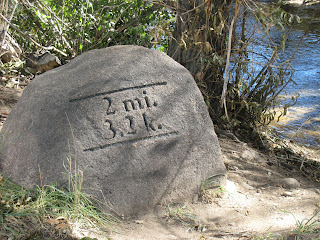 Running is a good metaphor for the spiritual life. Right now, I run at the back of the pack, way back. But sometimes I say to my coach that I want to run right next to him, at the head of the pack. He looks at me and says, "Are you insane?" He knows that I cannot suddenly begin to run with all the others, much less be in front. So he might gently say to me, "If you are willing to do the workouts that I do and suffer the pain that I suffer, then you will improve and become all that you can be as a runner." I cannot get better without putting in the workouts over a long period of time. There is a light at the end of the tunnel but as my coach says, "It is a long journey." As to running next to him some day, that is not for him to say. Each of us has a talent level. I can become all that my body will allow, but that does not mean I will run at the head of the pack or next to the coach.

Now turn to the Gospel. The two disciples, James and John, want to bask in Jesus' glory, and be right beside him. They want it now. They don't want to put in the work necessary to reach their goal. Jesus does not say they are insane. He says, "You don't know what you are asking." Then he challenges them to drink the cup from which he drinks, that is do what he does and go through the pain he goes through. It is like my coach saying that I need to drink the cup of workouts he does each day, and suffer the pain of some of these efforts, and then I will reach my "glory."

The disciples make a pact with Jesus to do as he says. Jesus cannot guarantee that they will end up beside him because each of us has our own level of holiness. I will never be as holy as Teresa of Avila or Therese of Lisieux. They seem to have a lot more spiritual DNA than I do. But the disciples will become all that God made them to be if they put in the daily spiritual practices. The Church has given us plenty of spiritual workouts: mass, bible lectio, meditation and such.

The disciples are attracted to Jesus. This is as far as their effort goes. If I read a book on marathon running, I might be attracted to running a marathon, but it is just an attraction. I will not run the marathon just by reading a book. I need to put in the daily effort over a long period of time to be able to run the marathon to my particular talent level. If I read a book of prayer, I might be attracted to praying and drawing closer to God in interior union, but it is only an attraction. I must have a daily practice if I am going to move toward my goal. Yes, God is at work, but I must show up each day and make some effort to discipline myself and make choices to pray rather than do something else.

EBay, garage sales and second hand stores are filled with stuff originally bought but never used by people who were attracted to something because they read a book, saw a movie, or heard a talk. In the Bible Book of Isaiah 53:10 it says that God "was pleased to crush him in infirmity." Isn't God supposed to be loving, kind and compassionate? Yes, but do you want to grow from attraction to become all who God made you to be? To know and believe that God loves me is the beginning of the relationship. That is the attraction part. I know that my coach cares for me, but at times he will give me a workout that seems to crush me! He seems to know when I need to make a greater effort to extend my muscles and discipline myself at some deeper level, so that I will improve. It is the same with God. The daily practice of spiritual effort is not always easy. Sometimes we get sick, or infirm. Sometimes we lose interest or focus or just get lazy. Sometimes there are a lot of distractions. When times are tough like this, God may be trying to toughen us up so that we can bear some cross that is still down the road of a long journey to spiritual transformation. God is a light even in the tunnel of darkness.

I have to go now and do my workout!