My sister, the witch 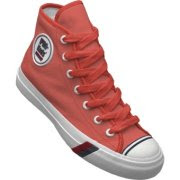 My big sister Maureen was a witch. I did not make this up. She told me she was a witch. She said, “All big sisters are witches. Some are good and some are bad.” Maureen was a bad witch. She informed me, “If you don’t do what I tell you, I will cast a spell upon you...a very uncomfortable spell.” She would wave her wand, which she called a magic wand. Years later I discovered that it was a cheerleader baton. What did I know as a little boy with a mean big sister, the witch.

One Christmas, I very much wanted US Keds sneakers. They were all the rage, red and white high top sneakers. A little kid with those on his feet was really somebody. Maureen said, “Santa will probably not bring you sneakers, because you have not been very good this year.” Translation: I had wearied the witch. She offered me some slim hope. “If you are very good and obedient to me in these last weeks before Christmas,” she said, “I might be able to put a spell on Santa and get you your US Keds.”

“How can I be good enough for you to put a spell on Santa?” I implored. “Well,” Maureen said, with a diabolical look on her face, “You will have to say some new prayers at night before you go to bed.” “What new prayers?” I asked. “I will show you,” she answered. That night when we knelt down at my bed to say my prayers, Maureen added a new one. “Instead of being a greedy little boy, always asking God for things, you must say a new thank you prayer,” she instructed me. “It goes like this: Thank you God for my beautiful and loving sister Maureen.” My mouth hung open. I spoke up. “Doesn’t God know when we are lying?” I asked. “Watch it!” she said as she pointed a finger at me. “Be very careful that you do not upset the witch. Santa might forget to bring you any presents.”

So I said this prayer each night with Maureen at my bedside. After we finished, each time, Maureen would say, “Now do you have hope that Santa will bring you your US Keds?” My hope was slim, but I so wanted my sneakers for Christmas. Finally Christmas Day came. I looked under the tree. There were presents for me. Santa had not forgotten. There was no present that looked like a wrapped shoe box. I tried to hold onto my hope as I opened each present, either games or clothes, but no US Keds. It was a bittersweet Christmas morning. After I opened the last present, I was happy with what I received, but still there was a bit of an empty space in my heart for US Keds.

I turned to Maureen. “Maybe those were not such good prayers, Maureen?” I questioned. “You question a witch?” she said regally. “Have you lost hope? I will look around and see if Santa might have misplaced a gift. He might have been messy since he is a BOY you know!” Maureen looked under the couch and then I heard her say, “Oh, what have we here?” She crawled out and in her witch hands was a shoe box like wrapped present. Hope grew and with it faith and joy! I opened the present quickly. My US Keds shining, new, red and white, just my size as I tried them on. Sometimes, if you have enough hope, a bad witch can become a good one, at least for a while.

Baptism is a sacrament of hope. It is a hope of great things to come. When I am baptized I become an adopted child of God, brother or sister to Jesus. I am “Beloved” and God is well pleased with me. I receive gifts and fruits of the Spirit. But they can remain hidden, like a pair of US Keds under the couch. They are there but they need to be brought out for all to see. God has great hope that this will happen in each of God’s beloved children. Evil forces try to fool me, as if to put a spell upon me, to convince me that I have no hope, that I am a mess, God is disappointed in me, ignores me, or does not even exist. God however, never gives up hope that my baptism will bear much fruit, that its power will be revealed in my life just as it was in the life of Jesus. Be all that I can be is like giving God the same joy as a boy who receives his first pair of brand new US Keds!